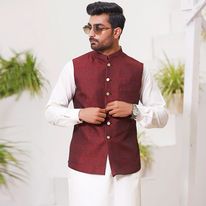 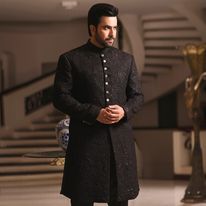 Be the first one to rate! Submit Review

Amir Adnan is the most notable menswear designer in Pakistan. He founded and runs the parent brand of the same name. With thirty years of unparalleled excellence under his wing, the creative maestro draws on his royal lineage for inspiration. An initiator of trends, Amir Adnan has crafted premium ensembles for celebrities and politicians. Both locally and internationally, with his Hollywood debut creating new milestones for Pakistan.

Credited to have revived sherwanis in the region. His combination of out-of-the-box thinking and a desire to preserve tradition have culminated in forming trendy, dapper, and elegant clothes and accessories for men, alongside breathtaking fragrances, and a pristine personal care line.

Whether you’re searching for sherwanis, shalwar kameez, shawls, waistcoats, wallets, shoes, fragrances, or skincare products. Amir Adnan is a one-stop hub that caters to men, adding flair and magnificence in their lives. Regality is embedded in every fold, stitch, and molecule of Amir Adnan’s coveted designs.

Amir Adnan also has many accolades to his name, such as the Pride of Performance Award in 2006 for his outstanding achievements in the field of Arts and Design. He has also been lauded as the “Best Menswear Designer” at the Lux Style Awards in 2006 and 2016.

His work has been showcased at numerous events, such as Dubai Fashion Week, Fashion Week Karachi, Fashion Week Lahore, and the Fox TV Live Show in LA. He has also displayed his collection at Fashion Pakistan Week (FPW) in Spring/Summer 2018 in Karachi while creating awareness for the deaf community, and having members participate in the walk.

Additionally, Amir Adnan is a founding member of Fashion Pakistan, of which he has been the CEO twice. Moreover, he has also been on the board of the Pakistan Institute of Fashion Design (PIFD).

Q HOW DO I PLACE AN ORDER ONLINE?

Shopping online at Amir Adnan is very easy. You need to follow these steps:
Click on the product you want to purchase
Choose the desired color and size, then choose add to cart option.
You can now see your shopping cart. If you want to purchase another item, click on CONTINUE SHOPPING button. If that’s all you want, click on PROCEED TO CHECKOUT.
Register your account if you are a new customer and continue to payment options.
Fill in your contact details, preferred shipping & payment method and click on CONTINUE button.
Your order will then be placed successfully

Q HOW WILL I KNOW THAT YOU RECEIVED MY ORDER & WHEN WILL MY PAYMENT BE DEDUCTED?

After you place your order, a confirmation e-mail will be sent to you. Your card will only be debited at the time of dispatch. However, in rare situations where any of the items you ordered goes out of stock, we will contact you by e-mail and you will only be charged for the value of the items in stock.

Q WHAT HAPPENS IF THE PRODUCT I'VE ORDERED ISN'T IN STOCK?

Our website system is designed to ensure that stock levels are always accurate.However, if any of the items you ordered goes out of stock, you will be instantly informed via e-mail ¬ be charged for out of stock items.

Q WHY IS MY ORDER MARKED AS

To avoid the risk of fraudulent transactions, all the orders and payments are reviewed by our online QA department. Once your payment is approved, you will receive a notification via email and your order will be marked as 'Paid' automatically. The review process usually takes around 4-48 hours.

Q WHAT IS THE PROCESS TO CANCEL MY ORDER?

Once your order has been placed, it is not possible to cancel.

Own or work here? Claim Now! Claim Now!
You need to input your username or hashtag.